Community Foundation Announces New Board of Director Appointments and Promotions

Community Foundation Announces New Board of Director Appointments and Promotions

MONTGOMERY, NY (July 28, 2022) – The Community Foundation of Orange and Sullivan (CFOS) has announced the appointment of two new directors to its board and the promotion of a longtime director to the role of chairman.

Richard Shapiro, J.D., CELA, CAP began his term as board chairman on July 1. He takes the reigns from Michael Bonura who served for two years as chairman and remains on the board as a director.

Sarita Bhandarkar, J.D., LL.M. Tax and Inaudy Gil Esposito, MS joined the board as directors this month. Their appointments follow the untimely passing of longtime board member Katharine Fitzgerald who faithfully served since 2005.

“I can’t say enough about the outstanding commitment of Michael Bonura as chair and Kathy Fitzgerald for her more than a decade of selfless service,” said Elizabeth Rowley, CFOS President and CEO. “We are beyond fortunate to have esteemed attorney Richard Shapiro stepping up to lead the Board for the next two years.”

Shapiro is a partner at Blustein, Shapiro, Frank & Barone. He heads the firm’s estate planning, probate, and elder law department and counsels clients in creating tax-efficient legacy plans that provide asset protection throughout the generations. Rich has been a valued member of the Board of Directors since 2013 and the Foundation’s Professional Advisors Council since 2007.

Bhandarkar opened Bhandarkar Law, P.C. in Cornwall in 2018. She practices primarily in wills, trusts and estates, elder law, and special needs planning. Prior to beginning her legal career, Sarita worked as a high school English teacher.  Sarita has been a longtime advocate for the Foundation, also serving as Chair of the Professional Advisors Council.

Gil Esposito has been the Executive Director of the Orange County Human Rights Commission for more than five years.  Her expertise includes 15 years of work in the areas of social justice, diversity, equity, and inclusion, and gender violence issues.

“This is an exciting time of growth for the Community Foundation and the addition of these two dynamic board members will ensure that we can best serve our diverse family of funds which make our communities better places to live,” added Rowley.

About the Community Foundation of Orange and Sullivan (CFOS): Based in Montgomery, NY, the Community Foundation of Orange, and Sullivan connects people who care with causes that matter. Established in 1999, the Foundation helps philanthropic individuals, businesses and organizations establish charitable funds that will award grants and scholarships, for good, forever. The Foundation has significantly increased the region’s charitable capital and has empowered donors to make a profound difference in the quality of life in our region. Since its inception, CFOS, with its donors and fund representatives, has awarded more than $24 million in grants and scholarships. The Community Foundation of Orange and Sullivan currently administers 360 active charitable funds that represent $50 million in assets to support animal welfare, arts and culture, education, the environment, health and human services, recreation, and youth. To learn more, visit cfosny.org. 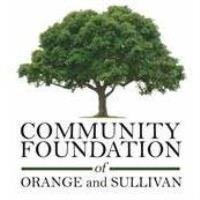