Celebrating its 77th Season as “The Miracle of the Forest, Forestburgh Playhouse, under the leadership of Producing Artistic Director Franklin Trapp, proudly announces its 2023 Season of musicals and plays.

“The Forestburgh Playhouse 2023 Mainstage Season will be a thrilling celebration of live theatrical entertainment in the Sullivan Catskills,” said Producing Artistic Director Franklin Trapp.  “Our mainstage season will be quite exciting on many levels.  Our season is chock full of major Broadway hits including: Jersey Boys, Monty Python’s Spamalot, Matilda the Musical, and The Addams Family.  The Absolute Brightness of Leonard Pelkey will inspire laughter and tears and audiences should get ready to solve one of our favorite mysteries of all time with Clue the Musical. Suspense will abound in Stephen King’s Misery.  In addition, our Children’s Theatre Series this summer is featuring not one, but two amazing shows for the whole family–Dreamworks’ Madagascar the Musical and Gordon Gets Down!” The Playhouse season will once again include Spring Series at the Forestburgh Tavern, Broadway Concerts Under the Stars, A Fall Series at the Tavern and of course, The Rocky Horror Show during the month of October. According to Trapp, “We are also proud to announce that the In the Works-In the Woods Festival will be returning for a 3rd year to celebrate and present the work of emerging artists.”

Playhouse Season Passes are available for purchase as well as the popular Flex Ticket 6 Pack, which provides six voucher-tickets to be used in any combination throughout the season.  Passes and 6-Packs are available online at www.fbplayhouse.org or by calling the Box Office at 845-794-1194.

ABOUT THE FORESTBURGH PLAYHOUSE

The Forestburgh Playhouse is the oldest, continuously running, professional summer theatre in New York State.  Located in the Sullivan Catskills, the Playhouse was founded in 1947 by John Grahame and Alexander Maissel.  FBP’s mission is to present high-quality, professional theatre, including musicals, plays, cabarets and theatre for young audiences; to provide arts education programming for local youth; to develop and launch the careers of young artists; and to foster the development of new works through an annual new works festival.  FBP attracts over 30,000 patrons each summer and was one of the first venues in the U.S. in 2020 to return to live performance with its Under the Stars concert series featuring notable performers such as Tony Award-winner Alice Ripley, Tony Nominee Kate Baldwin, Nicholas Rodriguez, Morgan James, Kyle Taylor Parker and more. The Playhouse celebrated its 75th Anniversary in 2021. 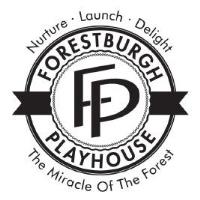