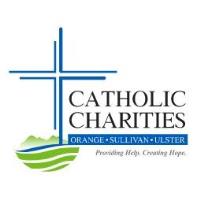 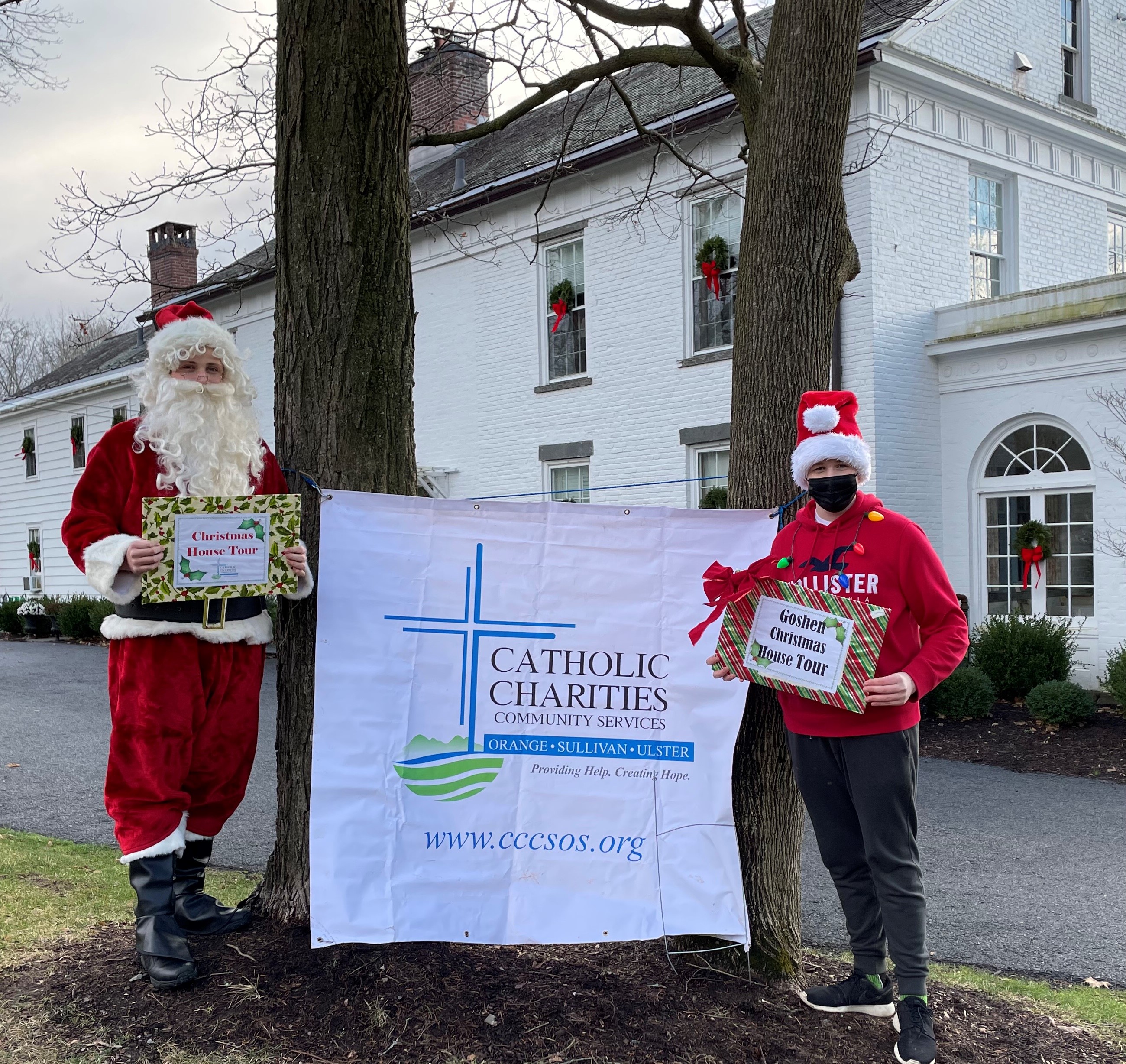 Goshen – The need to pivot was an often-repeated theme for 2020 and the 6th annual Goshen Christmas House Tour hosted by Catholic Charities of Orange, Sullivan, and Ulster was no exception. The beloved holiday event took on a pandemic twist and became a self-guided driving event featuring the fun and festive outdoor decorations of more than 30 homes in the greater Goshen area. The pandemic version of the Tour raised more than $19,000 to support Catholic Charities’ emergency food and shelter programs.

Tour guests were greeted by a waving Santa and his elf as they arrived at the Stagecoach Inn launch location in the Village of Goshen. More than 200 vehicles, many packed with multi-generational family “pods,” purchased a car pass to participate in Catholic Charities’ “Lights! Around Town” Tour. Tour passes included a map and QR code to access the addresses and driving directions for the 32 participating locations, as well as two different age-appropriate scavenger hunts.

“Catholic Charities’ 2020 version of the Goshen Christmas House Tour was a great success for our community and our agency,” said
Susan Murray-Tetz, Catholic Charities board member and chair of the House Tour committee. “It’s been a tough year and so many of us needed a change of scenery. We were thrilled to offer people of all ages a way to kick-off the Christmas season in a safe, socially distant way. Our homeowners did a phenomenal job with their decorating, we were blessed with volunteers who braved the cold to help with registration and ticket
sales, and, thanks to our advertisers and sponsors, we raised much-needed funds to help our neighbors in need keep a roof over their head and food on their table. It was a win-win-win!”said Ms. Murray-Tetz. 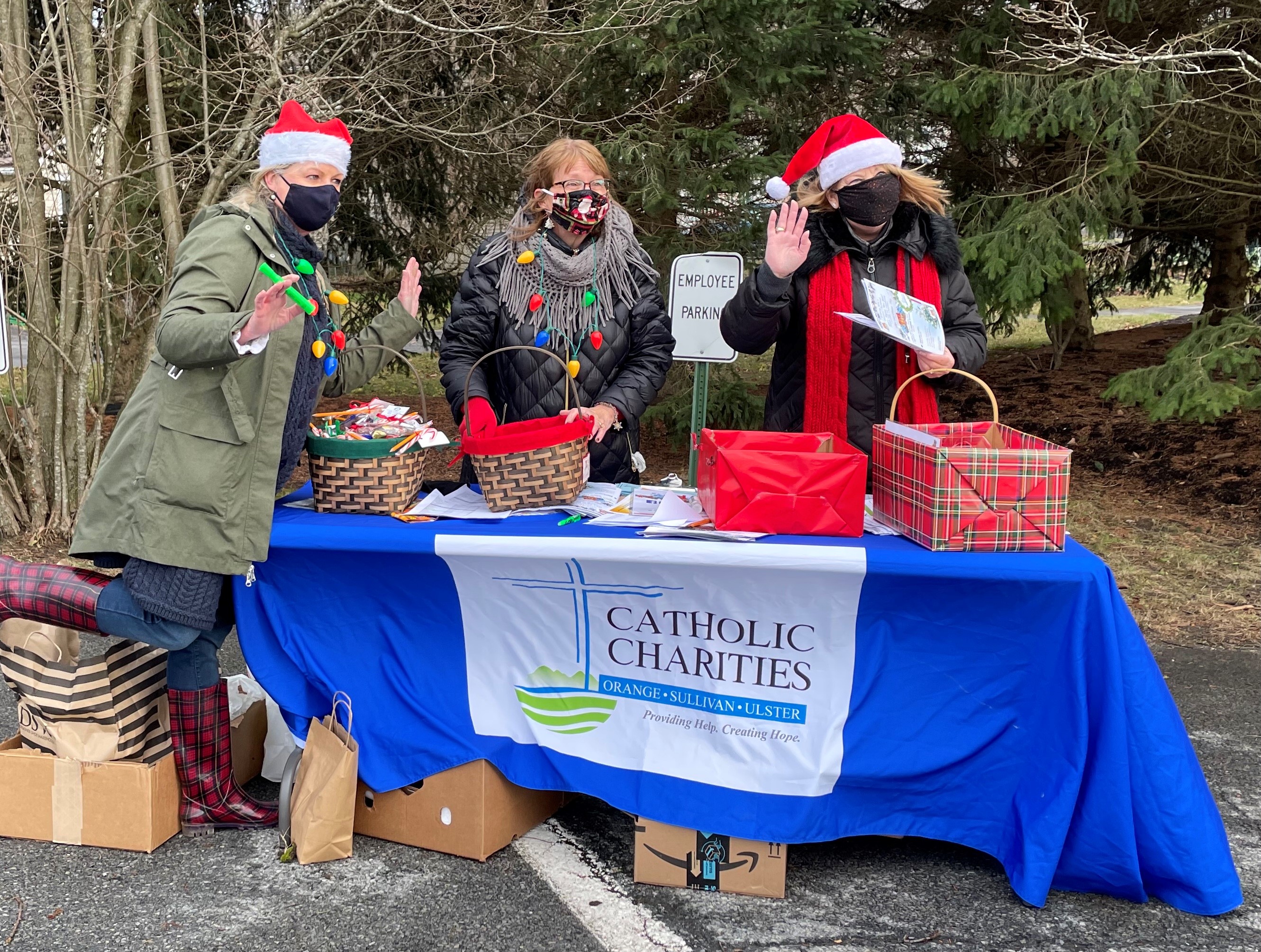 Tour guests were invited to vote for their favorite homes in four different categories. Taking the top prizes were: Adult Favorite – the Quinn Home at 321 Sarah Wells Trail; Kids’ Favorite – the Zellner Home at 41 Prospect Avenue; Most Traditional – the Sherlock/Rae Home at 103 Murray; and Most Creative – the Losee Home at 166 Murray Avenue, decorated with support from the Junior League of Orange County. Winning homeowners received gift cards to local restaurants that were generously donated by House Tour committee members.

Tour participants were also invited to donate items of winter clothing or non-perishable food for a free door prize entry. Close to 300 items of clothing and food were collected and were later distributed during Catholic Charities’ Christmas toy giveaway event.

The annual Goshen Christmas House Tour raises funds for Catholic Charities programs in the community, including emergency food and shelter and addiction prevention, treatment, and recovery support. The funds raised stay local to help the marginalized and vulnerable in Orange, Sullivan, and Ulster Counties. Assistance is provided to those in need regardless of religion or ability to pay. For more information about Catholic Charities’ programs, visit www.cccsos.org.