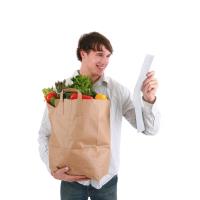 Johnny the Bagger: a Customer Service Story
Several years ago,  a motivational speaker at a convention shared the story of “Johnny the Bagger.”
The presenter was hired by a large supermarket chain to lead a customer service program, and she shared that experience with us.
In her presentation to the employees of this supermarket she said, “Every one of you can make a difference,” and she challenged them to do something to make their customers feel special–create a memory that would make the customers come back.
A month later she received a phone call from a 19-year-old grocery bagger named Johnny. He proudly informed her that he had Down syndrome and told his story.
“I liked what you talked about,” he said, “but at first I didn’t think I could do anything special for our customers. After all, I’m just a bagger.”
Then he told her of his idea. Every night after he came home from work, he would find a thought for the day. If he couldn’t find one, he made one up. His dad helped him set it up on the computer and print copies. Johnny would cut out the copies and sign his name on the back. Then he’d bring them to the store the next day.
When he finished bagging someone’s groceries, he would put his thought for the day in the bag and say, “Thanks for shopping with us!”
Johnny was providing a very unique experience for his customers.

The Power of the Difference

A month later the store manager called the speaker and said, “You won’t believe what has happened! Today I found a crowd of customers in the line where Johnny bags, and it was three times longer than anyone else’s.” The manager said he tried to get people into other lines and they replied, “No, it’s okay–we want to be in Johnny’s lane–we want his ‘Thought for the Day’.”
The store manager was overwhelmed by watching Johnny make his customers happy. One of Johnny’s customers said, “I used to shop in your store once a week, but now I come in every time I go by to get Johnny’s ‘Thought for the Day’.”

A few months later, the store manager called our speaker again, saying, “Johnny has transformed our store. When the floral department has a broken flower or unused corsage, they find an elderly customer or a little girl and pin it on them. Everyone is having fun creating memories!”
“Surprising” and “delighting” the customer have become marketing buzz words but for businesses that are finding real ways to do this, they’re seeing some amazing results and creating raving fan customers.
Examples like this don’t cost much. They’re practically free and so easy to do. But these little differences are the types of things your customers don’t forget.
Business Directory Events Calendar Hot Deals Job Postings Contact Us Weather