6 Law Changes That May Affect Your Business in 2020 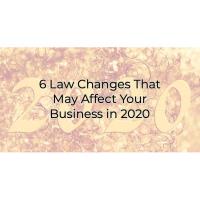 6 Law Changes That May Affect Your Business in 2020

Ahhh 2020. A year in which the futuristic movies Blade Runner and Back to the Future are both now set in the past. If that doesn't blow your mind, you’re either under 25 or not one for movies.
Not impressed? Then how about some of the big changes that are taking effect for small business this year?
Many of these were signed into law a little while ago (like a few years ago) but didn't become mandatory until 2020. Even though some of these legislative changes were made on a state level, if you sell people in these states, they might affect your business as well.

Here's everything you need to know about the big changes affecting small business.

Starting on January 1st, 2020 there's a new minimum wage in the following states:

Many of these states are also increasing their minimum wage as part of an incremental plan by their state legislatures to eventually establish a minimum wage of $15 an hour. The increases in the minimum wage in the following states go into effect later this year:

Even if your state is not one of the many that has increased its minimum wage this year, you may feel some pressure to increase the salaries you offer in order to remain competitive from a hiring perspective. Most states now have a higher minimum wage than what is dictated by the federal government.

While this is not a new ruling, the changes in overtime are now officially going into effect. If you haven't kept up…
Overtime floors have changed. That means employees who earn below $684 per week (or $35,568) must now be paid overtime. This is an increase from the previous threshold of $455 per week or $23,660 annually.

Bottom line: you may have employees who are now eligible for overtime who weren't eligible in the past.

You know how with every new employee you have to give them a withholding form and then they decide how to withhold tax from their paycheck by listing a number of dependents? It’s confusing for employees and many of them over or under deduct by accident. No longer.

This form is now being replaced by a new W-4 form that will now reflect dependent information from the employee’s tax return. While this ruling came down in 2017, it’s only now becoming official.

If you do business with people in California, even if you're not based there, you may have to adhere to new California legislation that requires businesses to divulge what information they have on people and how they're using it.  This could change your marketing especially if you're keeping track of activity history or something beyond basic contact data. This law also gives “Collectees” the option to have their data deleted from the company's computer system.

You may also need to adhere to this new privacy act if you are business that handles information collected by others. For example, if you produced software that businesses used for marketing purposes and collected that data, you may be affected.

However, if you’re a small business with less than a 25-million dollar revenue base (calculated globally, not just nationally) and you have under 50,000 California residents in your database, you needn’t comply (at least not yet).

While 50,000 sounds like a very large number, it's important to note that each piece of data or contact information is considered an individual. For instance, a subscribers cell phone and email are counted as two California residents even though they belong to the same person. Each contact point is considered a single Californian.

While many cities and counties have blazed the campaign against ending plastic bag use, Oregon becomes the first state to ban plastic bags starting this year with New York following close behind. We'll have to wait and see if other states follow this practice or if it starts changing how we ship materials as well.

California is also using 2020 as the year it looks to protect members of the gig economy. This year, they are placing strict provisions around what job duties can be designated for work as an independent contractor and which require businesses to higher for the positions as full-time employees. This will likely change the structure of California's independent contractor landscape.

2020 is a big year for legislative change. While these things have been brewing for some time, this year marks when they go into effect and when the government begins ensuring businesses are following the legislation.

So if you've been putting off thinking about the ramifications of these changes on your business, it's time to realize the future is here and so are the potential penalties and fines.